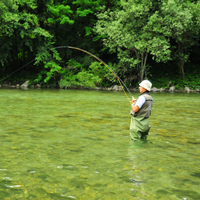 Whether you have been fishing for decades, years or even days, you have probably heard the term “tight lines”. Well people do not just use the phrase because they are bored. The simple fact of the matter is that loose lines are the single best way to lose fish.

While fishing is seen as a relaxing getaway and a way to sit back and enjoy the outdoors, too many inexperienced anglers will simply cast their line in the water and forget it. They sit back, crack open a beer, and even tie their rod to a chair and walk away. All this does is increase the chances that fish are going to nibble away at your hook and steal the bait from right under your hose.

The biggest fish are the oldest, wisest and most experienced fish. If you want to hook into the trophy trout then you are going to have to work a lot harder than that. A battle with a monster trout is often won within the first 5 seconds of the bite, and it is up to you to be ready with tight lines.

Even experienced fishers are fooled sometimes and let their line slack. A common problem occurs when anglers assume they are caught on a rock, log or the lake bottom and instantly let their line loose. The argument is that many anglers think they can instantly feel the difference between a snag and a “take”, but it is actually quite a lot harder than most people assume.

It is a natural reaction to assume you are stuck when the pole bends and you don’t feel the usual nibbling vibrations, but the key is to not react too quickly. The first thing you should do is reel the line in slowly. If the line comes in then chances are you are not stuck at all. You may have just hooked into the lunker you have been waiting for. If you simply feel the pole bend and immediately release the bail, you could lose out on the catch of the day.

Another way to keep your line tight and check if it is a snag or a fish is to release your drag just a little bit. If it is a fish on your line you’re going to hear the drag squeal as your catch tries to pull away.

The worst case scenario ends up being that you are indeed stuck. You can always release the line later on if you realize you are stuck, and you still won’t lose anything. If you want to enjoy relaxed fishing and leave your line in the water while you play cards, all the power to you. There is nothing wrong with a relaxing day of fishing; however that is often what makes the difference between dining on fresh trout at the end of the day and eating plain old crisps for dinner.

Today’s lesson? Keep those lines tight at all times until you are sure you are hooked into something other than a fish.

Loose lines lose trout; it is as simple as that.

Fishing is more than a hobby for me, it is a lifestyle. I do not intend to settle into one routine, one method of fishing, or even a preferred location. I want to fish all over the world, hook into all kinds of fish and learn an array of different methods. I will never call myself a pro, as there is always something to learn when it comes to fishing and I will always be a student. However I will continue to spread the knowledge I do have and pass down my passion onto others, as there is not much in the world for thrilling than the pursuit of fish.