Does Powerbait Really Have The “Power”?

Sitting in clear tubs lies a vibrant dough type mixture with glitter that promises the Earth when it comes to fishing for trout. But does Berkley Powerbait really have the power it so eagerly promotes? I put it to the test on two occassions with mixed results.

I was first introduced to Berkley Powerbait back in June 2009 when I visited the Millenium Trout Fishery in Haddington. A last minute plan for a days fishing and teaching my friend Rob the basics of float fishing meant we left without thinking about bait, only to rock up at the venue and realise we had made a fundamental flaw.

The staff offered us Powerbait which we had never really tried before (and didn’t really have a choice) and after paying for our admission off we went with a pot in hand. After setting up our lines I opened the jar of what I can only describe is smelly – yet very colourful – dough to question how the hell I should place this attractively on a hook. Another angler, who had about 12 pots of the stuff in his bag, kindly showed us how to roll a blob of it into a ball and place it onto a hook.

And so off we began fishing and it wasn’t long until I got a bite. That day landed two trout in semi-decent conditions and we decided to return thinking Powerbait was the dog’s bollocks of all baits. Unfortunately, on the second occassion, the fish didn’t seem to be interested and only one was caught that day, but I couldn’t solely blame it on the Powerbait as the weather was much worse and not many people were catching anything at all.

Fast forward a month or two and we’re at the Carbeth Fishery in Loch Lomond after an unsuccessful morning and afternoon trolling the Loch. That was the first time I had ever trolled and without any real knowledge between us, it wasn’t such a hot idea to try and tempt a willing salmon in one of the biggest lochs in Scotland. 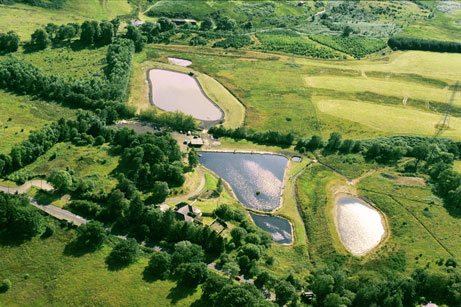 The welcoming owners at Carbeth had grubs on hand and so I decided to do a split test – one rod with Powerbait, another with grubs. That day plenty of people were getting successful strikes and it wasn’t long before I caught a beautiful rainbow weighing in at just over 2lbs…with the grubs. Both lines were setup exactly the same and I made sure I was giving each rod a fair chance. After chatting to some other anglers – who were also successful that day – it seems like grubs were the food of choice for the fish at Carbeth with only one angler using Powerbait. Saying that, he managed to catch a few trout so it would be unfair to say Powerbait is completely useless.

I must admit I’m a big fan of natural bait when it comes to spinning because a juicy worm or wriggling maggot will always tempt a trout in my experience. Powerbait is a good and proven alternative if you don’t have any alternatives but I would never completely replace it for the former two options. At around £5 a tub it is perhaps worth keeping one in your tackle bag as a backup.

As the Founder and Editor of Trout.co.uk, it is my responsibility to ensure the site is updated every day of the week with quality information from a variety of sources.

I have not use the dough but have caught 100’s of trout with the Berkley Maggots, The most effective colour is the white and then the pink. I am a fly fisherman down to the bone but trust me when I say here in south africa the trout in summer want to know nothing about your fly so the next best thing is the Maggots. Method: Floating line, strike indicator and tie a bright orange egg pattern about 3ft bellow the indicator to attract the trout and about 20cm bellow the egg attach a size 12 nymph hook and thread the maggot on the hook as if it is a caddis or something. De-barb the hook as the trout swallows it deep. It makes the difference between getting sunstroke or Putting 20 Trout on the bank. Cheers Rod. By the way, awesome website.